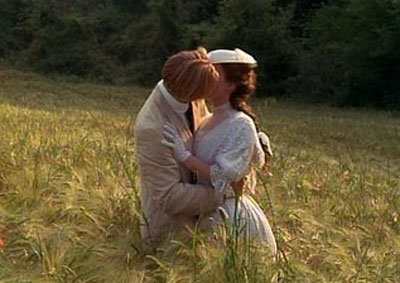 The famous kiss, in Merchant-Ivory's wonderful 1985 adaptation of "A Room with a View", starring Maggie Smith, Julian Sands, and Helena Bonham-Carter.

This is my favourite of E. M. Forster’s novels. It is guaranteed to put one in a good mood with the whole world – for how can one possibly feel quarrelsome when faced with youth, love, laughter, and the glorious sunshine of Italy?!

The whole story revolves around a kiss (a good foundation for a story, if ever there was one!). Lucy Honeychurch is travelling through Italy with her spinster cousin Miss Bartlett, who is narrow-minded, repressed, and likes to feign unselfishness, while, of course, practising nothing of the sort. In Florence, while staying at the Pensione Bertolini, they strike up a reluctant acquaintance with George Emerson and his elderly father, who offer them the use of their rooms, which have a view over the Arno, in exchange for their own, which do not. George Emerson, being a clerk in the railway, is not quite the “right sort”, as Miss Bartlett is quick to point out. However, Lucy finds herself troubled by him in a way she cannot explain (she is not the brightest of heroines).

During a picnic on a hillside overlooking Florence, Lucy wanders away from her chaperones. In a wonderfully comical scene, the driver mistakes her request to lead her to the “buoni uomini” (the good men) and takes her, not to the two clergymen who also make up the party, but to George, who promptly kisses her. Upon which, Miss Bartlett turns up and spoils everything. When asked what on earth she could have been thinking, Lucy blames the violets that carpeted the hillside at that spot.

Convinced that Lucy’s reputation is seriously compromised, Miss Bartlett bundles her off to Rome, where they bump into Cecil Vyse, an acquaintance of theirs from England, who is educated, cultivated, and an eminently desirable parti. He is also supercilious and sneering. But by this time, the kiss has become something sordid, something never to be mentioned again – and therefore referred to constantly by Miss Bartlett – and Lucy welcomes Cecil’s attentions. Back in England, they become engaged.

But just as Lucy is congratulating herself on having escaped George, Fate and the Comic Muse intervene and lead the elder Mr Emerson to rent a villa not far from where Lucy and her family live. Lucy and George are brought into contact again, and the contrast between him and Cecil makes Lucy increasingly peevish. When, upon a different hillside, overlooking a different view, George kisses her again, Lucy angrily orders him never to set foot in her house again. Vehemently denying the obvious – that she is as in love with him as he is with her – she nevertheless breaks off her engagement. It is entirely thanks to old Mr Emerson that Lucy is made to see sense at last, and that the couple are reunited. Lucy and George elope and head straight back to Italy, the land of love, to the Pensione Bertolini, and its room with a view.

The choice of Italy as a setting for the first half of the novel is significant. It is not merely a divertimento, an opportunity to satirize the English traveller abroad and the English expatriate community in Florence. The bright warm sunshine of Italy is meant to act as an antidote to the chilly mists and dull grey skies of England. And metaphorically of course, this means that England represents hypocrisy and narrow-mindedness, while Italy stands for truth and freedom. Hence the importance of a hotel room with a view, at which the observer can gaze out onto a limitless horizon. Forster counts on the beauty of Italy to work its magic on the English traveller and pierce through the barrier of false virtue that cuts him (or her) off from life. Lucy speaks nearer the truth than she thinks when she attributes her impulsive response to George’s kiss to the violets: though incapable of articulating it, she has been dimly conscious of Italy working on her, causing her soul to expand like a flower in the light, and her joy at the violets – possibly the first genuine feeling she has ever experienced – finds a natural outlet in the kiss.

For E. M. Forster’s creed is that nature must be given her dues: love and passion are a part of life, and nothing to be ashamed of. Repress the body, and you strangle the soul. Thus George, calling out half-dressed to Lucy when she stumbles across him, her brother Freddy, and the Reverend Mr Beebe bathing in the forest pool, is more beautiful than Cecil in his perfectly knotted neck-tie and his strait-jacket of convention. Thus too, in the end, playing tennis is preferable to playing the piano, however beautifully: for though Forster is a lover of art and music, devoting whole passages in his novels to the latter especially, he is wary of the tendency to substitute art for life. Cecil falls in love with Lucy essentially because she reminds him of a portrait by Leonardo de Vinci, and while he contemplates the mystery he fancies lurks behind her smile, he quite fails to see the flesh and blood woman in front of him. And Lucy playing Beethoven or Schumann is made restless and peevish because the music arouses feelings within her which are allowed no outlet as yet – her music does not bring her satisfaction because it is not an end in itself but a prelude. This is what Mr Beebe, with the clear-sightedness of a prophet, means when he says: “If Miss Honeychurch ever takes to live as she plays, it will be very exciting – both for us and for her.”

With its humorous debunking of hypocrisy, its pagan emphasis on the physical, and its happy conclusion, A Room with a View is a gloriously life-affirming novel, resonating even in such liberated times as these, when Edwardian fustiness and decorum have long since become a thing of the past.

I love books - buying books, reading books, discussing books, and generally admiring them from all angles (except the e-book). I also love tea, roses, and my dogs, and seldom pass up an opportunity to slip them into the conversation.
View all posts by Miss Darcy's Library →
This entry was posted in Book Reviews, Fiction and tagged England, Florence, Italy, love, music, nature, satire, travel. Bookmark the permalink.